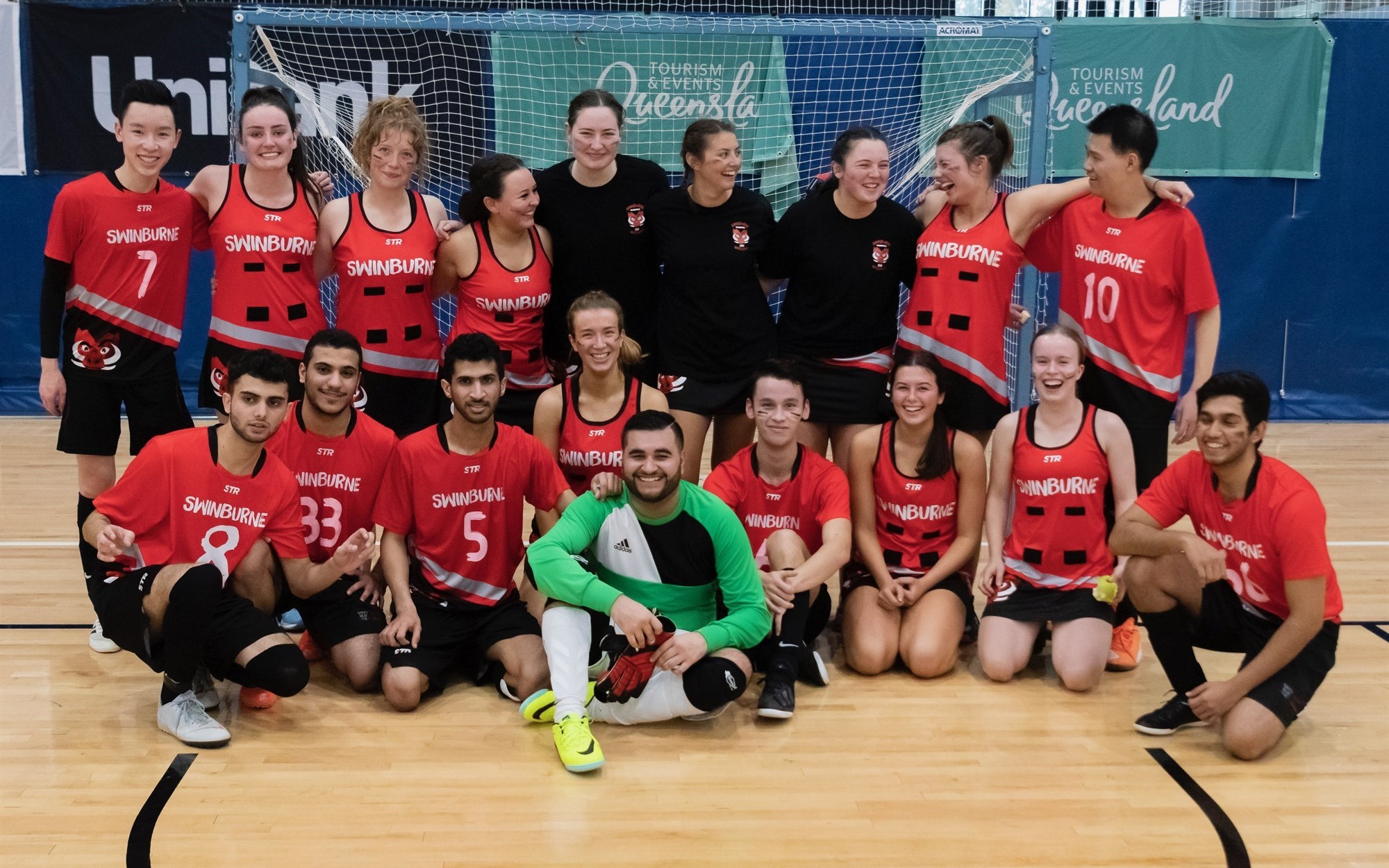 In case you missed the day to day action and updates, you can get the whole event in a short read here.

RAZORBACKS LAND ON THE GOLD COAST

The Swinburne Razorbacks sent two teams to Div 2 Nationals, competing in both Netball and Futsal competitions.

The Razorbacks left wet Melbourne to what they thought was to be a sunlit Queensland, only to be met by a downpour of rain on Sunday afternoon. Upon arrival, the team gathered themselves and their belongings, and headed straight to a night out with the team, organised by the University Team Managers, Regan and John.

This gave the team a great bonding opportunity, and a chance to build chemistry, as many of them had not played together prior to the competition. Despite the team being largely unknown to each other, they were excited to meet and learn about each other and form a bond through their passion of representing Swinburne and wearing the uniform together.

Day 1 began with the players putting on their Razorback jerseys, warming up and practicing before the match.

In their first game, the Futsal players faced Macquarie University, widely considered to be one of the best teams in the competition. The Razorbacks put up a good fight. Swinburne’s brilliant goalkeeper, Muhammed Karimi, tried his best to save and minimise Macquarie’s lead and the attackers managed to put one ball in the back of the net. However, despite Macquarie winning the match, there was no lack of thrilling game play, tackles, blocks and perhaps a yellow card or three. The team took notes from the first game and took their learnings into the next outing, coming out victorious in their second match of the day. The most passionate player by far was Wasam Alhinai. He ran across the court many times to put the ball into the back of the net. The game ended spectacularly, with striker Adarsha ensuring the 7-6 victory by scoring a winning goal in the final minutes.

Playing together for the first time did not hinder the Netball players’ enthusiasm. Their first match against University of Sunshine Coast ended in a 30-46 loss. The Razorbacks were determined to win the second game, but ultimately, the game ended in agony with a close four-point loss against Edith Cowan University. Down by a considerable margin, the fighting Razorback spirit shone through, closing the gap significantly in the second half. Towards the end of the game the Razorbacks had clawed their way back, levelling the scores. However a final last spurt by the opposing team put them ahead and we fell at the final hurdle. This didn’t hamper spirits, however, with the team confident in their abilities and their new found team chemistry leading into day two.

The Futsal team faced tough competitors in both matches resulting in two hard-fought losses but they team kept pushing till the end and performed much better in the second halves. Azan Alsheidi took the spotlight in the first match with two goals and a solid defensive effort. Benjamin Lee, in the second match, drove through the midfield on two occasions and hit the back of the net twice in quick succession. Ben’s goals gave the team plenty of motivation and confidence for their future games.

The Swinburne Netball athletes raced to a massive lead in the start of the first game of the day and finished the game with high spirits after a dominating win against University of South Queensland. After having gelled together on the first day of competition, the team chemistry worked better and showed clearly on the scoreboard with a massive 71-12 victory. With high spirits the Razorbacks then faced off against Federation University, returning Netball champions in their second outing. The competitiveness shown by the team despite the tough adversary was to be commended, fighting until the very last second despite the tough 32-54 loss. Siobhan shined in defence and Tayla was on the mark with scoring goals again and again. The execution of clean and swift passes from the entire team allowed them to perform to a great standard, however the competition was far more seasoned in the end.

The first game of the day saw the Razorbacks come up against Southern Cross University. Futsal players, Wasam and Azan, worked effortlessly together to get the early lead in the first match of day 3. Azan took the spotlight with two goals and elegant footwork making the ball disappear into the back of the net. Wasam showed his talent and skill as he struck the ball from beyond halfway to score a beautiful goal. The whole team moved fluently across the court to cement the victory with a 4-goal margin. The second game was full of top performances. Benjamin Lee scored a stunning goal in the first 3 minutes. The early lead was critical in setting up some scoreboard pressure on University of South Queensland. The Razorbacks went from strength to strength, with Adarsha opened the second half by smashing the ball through the net to increase the lead and pressure. Muhammed Karimi dove right and left to rack up numerous saves. Conceding only one goal, he walked of the court with a 7-1 victory for the Razorbacks in hand and a high save percentage.

The Netball team faced a tough time in the first game of the day against cross-town rivals, Victoria University, but they fought hard and stayed on the ball with fervour. Peggy worked both attack and defense and acted as the central backbone by leaping across the court to block a number of goals. Despite the eventual loss, the impact was barely visible on the team. They approached the second game against University of Western Australia in high spirits. Celia Hay shined in the front court by effortlessly receiving passes and getting them to swish through the net successively. The scores remained even for most of the first half. However, a quick onslaught by UWA, had the Razorbacks against the wall, down by 4 points for a moment. But they came back in the second half and kept the tensions high for the Futsal team watching and cheering the team on. The girls showed grit and determination known from Swinburne athletes, finishing the game strong and winning in a last-minute nail-biting 48 -46 victory.

Day 4 started with an early final match for the Netball players at 8 am match against Bond University. They went into the game with a winning attitude from their last match and finished the last day with a phenomenal 44-26 win. The victory capped off an amazing week of competition that saw the team grow with every performance. Siobhan, alongside Peggy, drove the energy of the team throughout the competition and it was apparent in their wins and losses, not allowing the team morale to deteriorate with any loss.

Not through lack of determination or effort, the Futsal team unfortunately fell on the final day in a hard-fought game against University of Western Australia. There was no shortage of effort from each player. Muhammed Karimi was constantly busy with punching and diving to block goals. His amazing saves made him take a kick to the face as he dived to grab a ball during a frantic first half. He even showed his striking ability when scored a goal in the second half of the game to try and will the team over the line. Ultimately, it proved to not be enough, with the Razorbacks falling on their final game of the tournament.

COMING BACK & LOOKING AHEAD

As team members came back from their final matches and packed up to leave, the nostalgia in the air was palpable. The players expressed that they were leaving with fond memories and that they will miss their time with everyone.

It proved to be more than just a competition, but an experience for them to grow as athletes, students, people and friends.

The support that one team had for the other as they would sit by the court for each other’s matches highlighted the Razorback spirit.

They were there for their fellow team mates to cheer on the victories and give support after the tough losses.

The Razorbacks will return for Division 1 competitions in late September. Keep a look out for more news by staying tuned with Razor the Razorback on Facebook. There are spots open on all teams for you to join in and don the Razorbacks jersey.